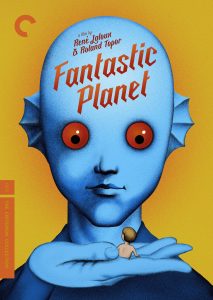 The first Sunday of the month is movie time at Alpine Public Library. On May 1 we will show Fantastic Planet. The movie starts at 2 pm. We’ll have free popcorn and air conditioned comfort in the AEP room at the library.

Fantastic Planet was awarded the Grand Prix special jury prize at the 1973 Cannes Film Festival, and in 2016, it was ranked the 36th greatest animated movie ever by Rolling Stone.