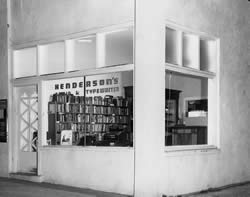 By 1947 memories of World War II were fading, and the residents of the Big Bend area were looking forward to a better life. Alpine’s radio station started up, and questions were raised about a public library. In over 12,000 square miles of the tri-county region there was no library to serve the 17,523 inhabitants.

Alpine’s El Progresso Club (a study club for women) took the lead. A dinner meeting was called at the Green Café in June 1947 to discuss the matter and each person was asked to bring a book. The 300 books brought by the club members formed the initial collection of the future library. 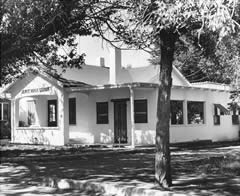 The next job was to find space to display the books. The husband of a club member, Mr. Walter Henderson, owner of a radio shop, offered shelf space. Some time later, the Brewster County Commissioners Court authorized the sheriff’s garage, next to the jail, as a one-room library. Bonnie Newell volunteered to act as unpaid librarian. Local interest in the library was high, and often a line of waiting children and townspeople ran around the building.

In May 1949 the Friends of the Alpine Public Library group was formed with the principal task of recruiting volunteers. It soon became obvious that a proper building was needed to house the library. Bill Sohl offered to sell his house on North 7th Street, and a fundraising drive was started to raise $14,000. The drive included bake sales, teas, and sporting events and included raffle tickets for an automobile. El Progresso Club won two civic awards totaling $5,000. The library was dedicated in August 1950.

What the new library meant was enormous. Ray Hendryx tells how Bonnie Newell used to take him to the exact shelf for the right books for his first-grade level, how he seldom left without at least three books and how he rated his library experience equal to learning to ride a bike. “I would not trade that memory for anything,” he says.

The library flourished. In the 1950s an oil delivery truck was adapted as a bookmobile and delivered books as far as Sierra Blanca. By 1970 the book collection had grown to 40,000; the purchase and remodeling of two more buildings at a cost of $25,000 doubled the floor space. In 1975 Alpine Public Library joined the state library system.

At this time 90% of operating expenses came from tax revenues voted by the county commissioners. The Alpine City Council also helped financially with $125 monthly. But what made the Alpine Public Library different then and today is that it is an independent entity governed by a Board of Directors. Also it is staffed by able, caring people, mainly volunteers. Over the years the dedication of volunteers and the support of the community have been the twin reasons for the library’s success. Nowhere is the former better demonstrated than by Mary Beth Garrett’s programs for kids.

In the late 1990s Dick and Jean Zimmer arrived and undertook a substantial cleaning of the property, updating the book collection and adding other library activities: a Ride and Read Program for kids, the establishment of a video and audio tape collection, and monthly book sales (from which the library’s Re-Reads bookshop grew). 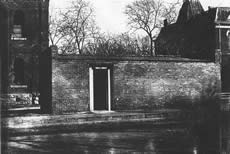 Ten years later it was clear that only a completely new, and much larger, library building would satisfy the needs of today’s users. The groundbreaking of the new library took place on December 4, 2008.  On February 2, 2012, the doors of the $1.4 million facility were opened to the public. With books, magazines, DVDs and computers, a separate Re-Reads shop adjacent and an expanded kids’ section, all efficiently housed in a large, bright space with a lustrous floor, the Alpine Public Library looks ready for the future.