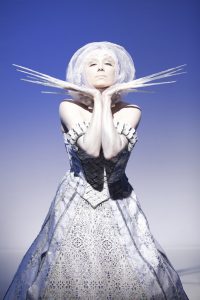 A DANCER’S DREAM: TWO WORKS BY STRAVINSKY – Performed in March 2013

Blending music with dance, live animation, pre-recorded video, puppetry, and circus arts, A Dancer’s Dream will blur the lines between reality and imagination, audience and performer. Using Stravinsky’s The Fairy’s Kiss and Petruskha as the foundation for a new narrative, the production chronicles the story of a young woman, played by Ms. Mearns, and her dream of becoming a dancer. Entranced by the music, she is “kissed” by the passion to become an artist and drawn into the performance, dancing to the complete score of The Fairy’s Kiss. By the second act, she has completed her transformation into an artist, becoming Columbine in Petrushka. The production will turn Avery Fisher hall into a dream world through costumes, sets, staging, and live filmmaking, Giants Are Small’s signature technique in which a real-time feed of musicians, puppets, and miniatures is projected above the Orchestra.