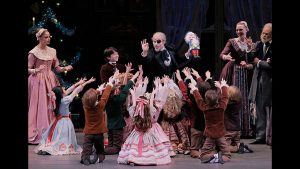 Come joins us at the library at 2:30 pm to watch this Lincoln Center recording of the Nutcracker ballet.

The Nutcracker first premiered on December 17, 1892, at the Mariinsky Theatre in St. Petersburg, Russia. At its premiere, The Nutcracker was considered a failure by the public and critics. Tschaikovsky died less than a year later, not knowing what a huge international success the ballet would later become.

Here are some fun facts on New York City Ballet’s production of George Balanchine’s The Nutcracker™: